anaiis – No Longer a Dream

For anaiis, making music is an act of generosity. And by harnessing her grassroots values of ‘empowerment and healing’ for the collective, she is ushering in a new era where her open-hearted transparency can reassure a new generation that it
is in fact okay to feel their feelings, and that the promise of a healing salve might just be found in the kindred sentiments she sings through your speakers.

At the prospect of speaking to anaiis about her newest album, this is no longer a dream, I’ve spent days with her spacious sounds on repeat, leaning into the honesty and sensitivity that have endowed her sonic space-holding. And while her own truths are being offered up in those crystalline harmonies, there’s nothing at all prescriptive about the healing she’s offering through her words.

“If I had to describe the way that I make music, I would say it’s more like an emotional painting,” she shares, when we finally meet after a few days of missed connections. “It’s more abstract, in a way. I don’t think there are many specific occasions where I write out exactly what has happened,” she tells me, “but I’m depicting the emotional journey that I went through, and I think that allows for people to interpret and reminds them [of their own experience].”

She’s sat on the sofa of a Parisian hotel room, while I’m nestled amongst the trees in Upstate New York, and despite our differing time zones, distance, and anaiis’ desire to finally “chill’ after a half-day’s worth of moving and waiting”, there’s a palpable sense of ease that emanates through our respective screens. Perhaps it stems from the comfort of another smiling Black face, and that of a woman who’s work shows a similar appreciation for tenderness and truth. Maybe it’s something to do with the bird song that flutters around me, or the calm that ensues her after finally having a moment to sit, settle, and find ease.

We’re glad to finally meet, and as we move through our introductions, and settle into discussion, it right away becomes clear that she’s not at all just another artist looking to hype up her newest output. But rather, promptly noticeable, is her willingness to head straight into the depths of why it matters, and what message she hopes to share along that welcome descent.

Through the transcendent melodies and open-hearted presence she offers, anaiis is attending to the unfurling spaciousness regarding mental health and personal well-being that have garnered an important repositioning on the cultural stage.

She especially emphasises said spaciousness as it extends to the Black – and especially Black female-identifying – community. “There’s a shift happening,” she notes, “We are transitioning into a space where we allow ourselves more joy, more peace, more tenderness, and more self-compassion.” 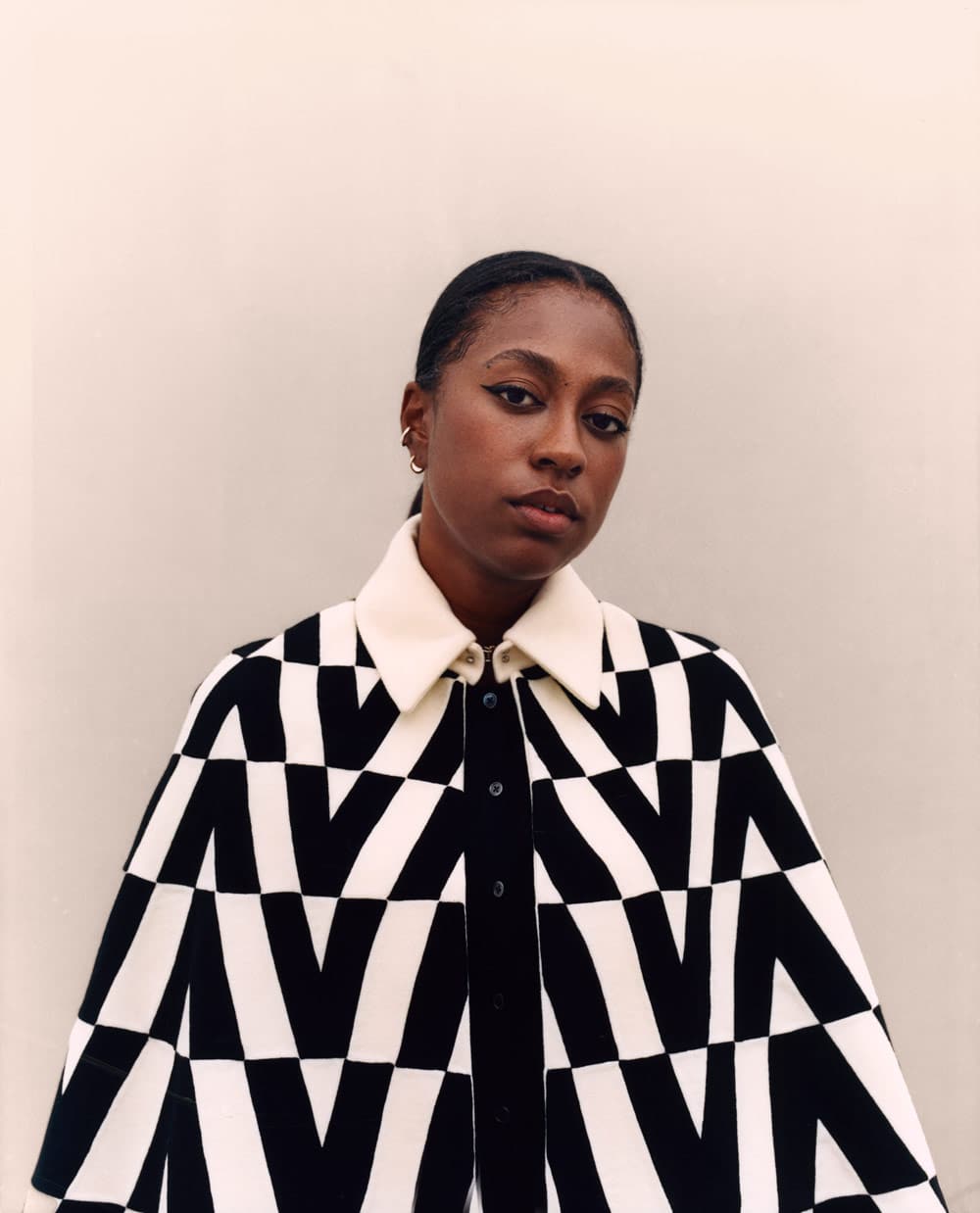 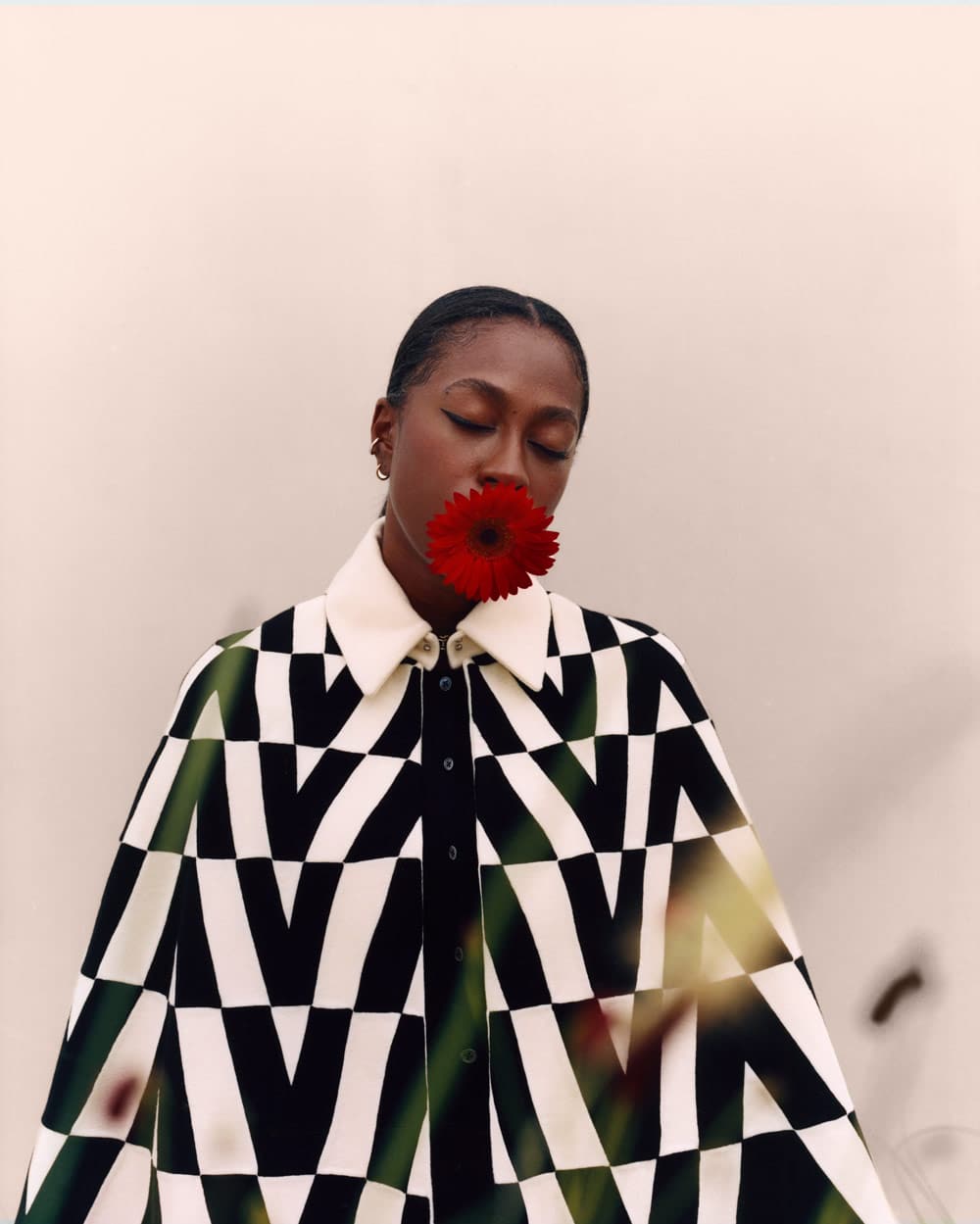 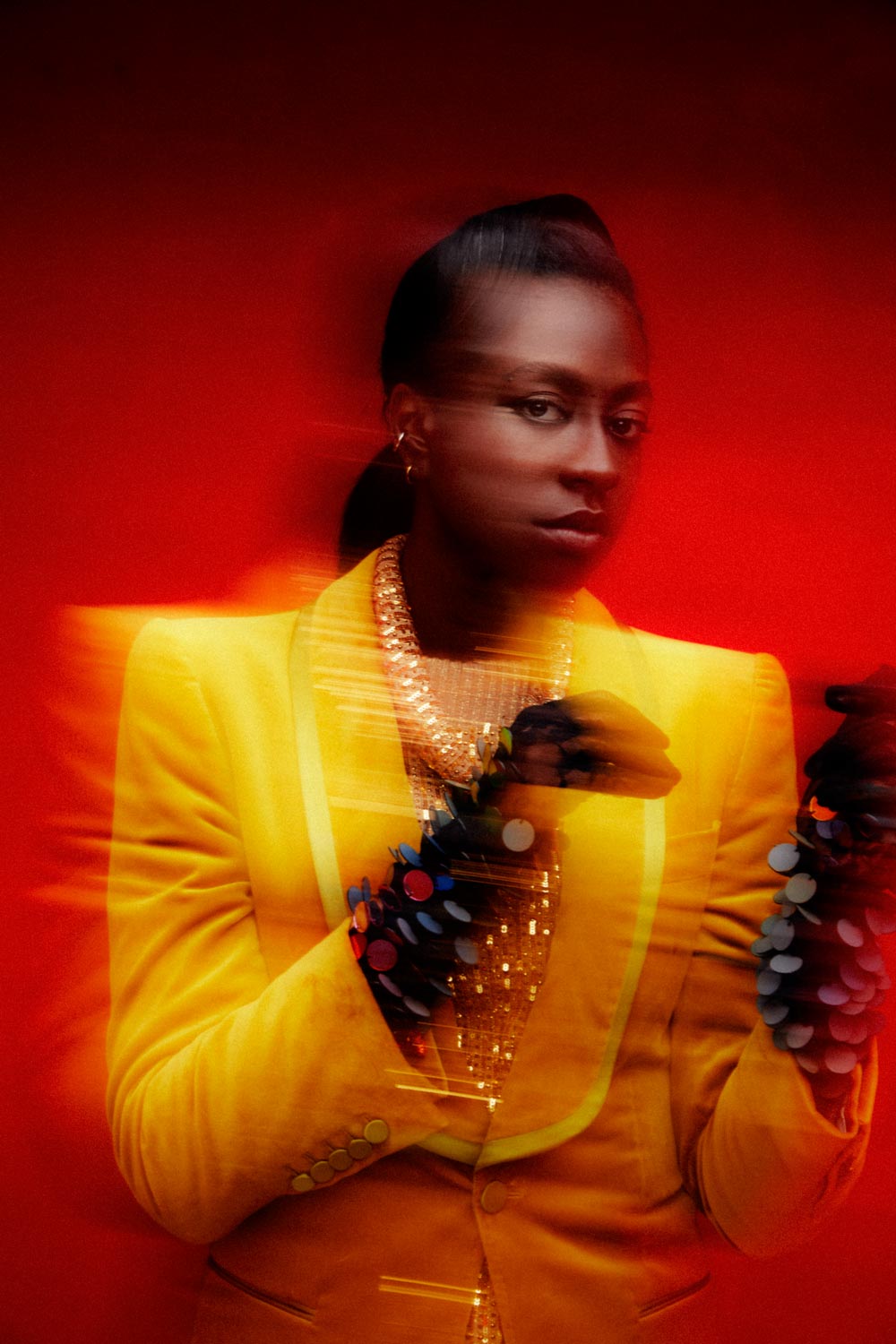 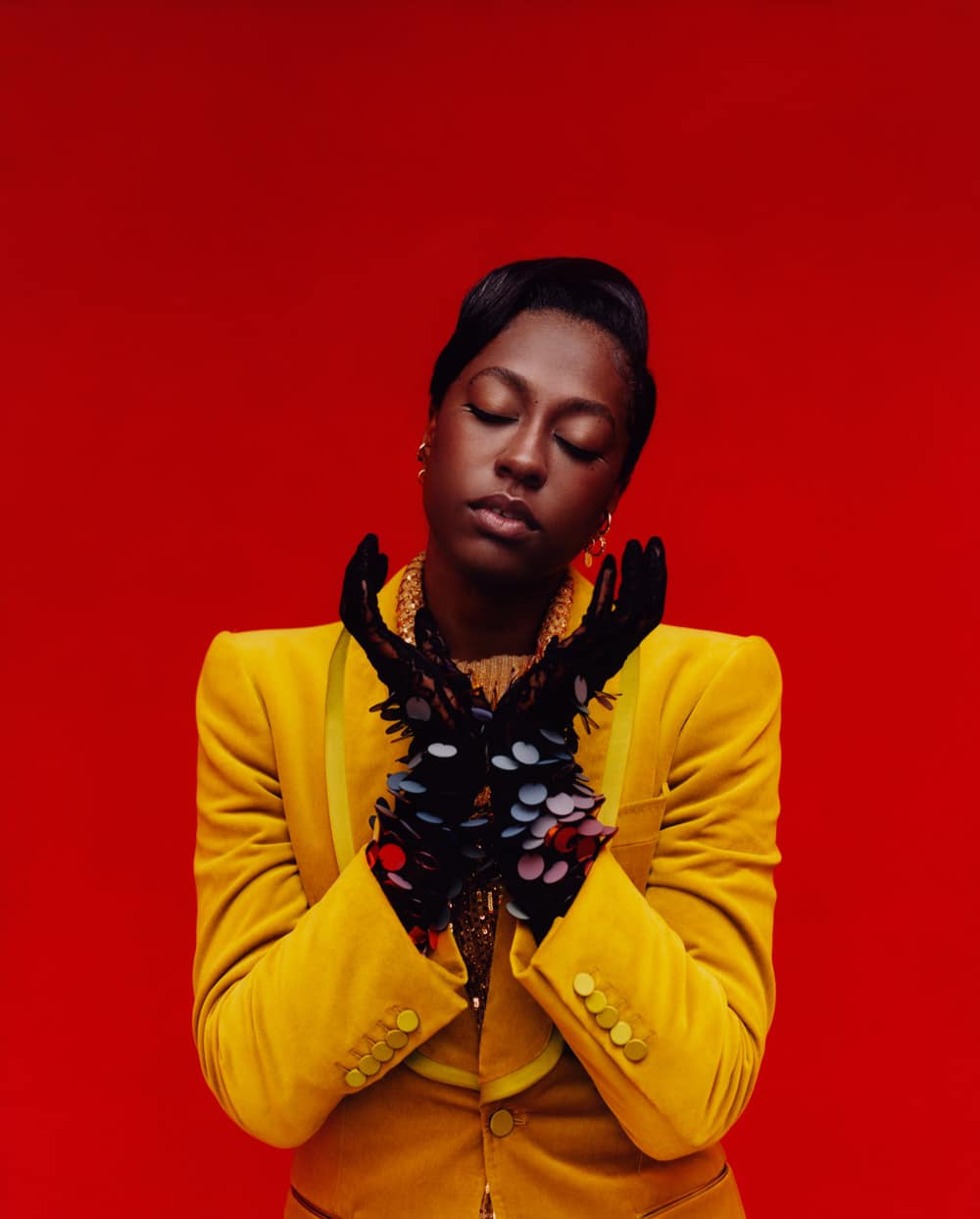 As we drawl further into discussion, I’m in constant admiration of anaiis’ calm and easy sense of vulnerability, and the willingness with which she allows her music to act as a channel for a much larger act of benevolence — one that doesn’t actually begin or end with her, but is rather a piece of a much more deeply seated collective effort towards liberation.

Tending toward the revolutionary act of self-love, pioneered by cultural change makers such as bell hooks, and James Baldwin, and in the light of the gravity of the circumstances which have called for these radical actions of love, it’s un- derstandable that she has at some point felt like her own story may not have been important enough to take center stage. “I really believed that my work had to be bigger than me,” she says, attesting to the resonance of that shadowy feeling, and the immensity that can often accompany a desire for continuation of such a profound legacy. “[But] overtime,” she adds, “I realised that our individual experiences matter, and that translated into me looking at myself, and saying, ‘my experiences deserve to be spoken about’ and I’ve realised that I could touch a lot more people by actually sharing my truth.”

The calm, yet brazenly unkempt manner in which her vulnerability unfolds through each track of the album makes it comprehensible how this sort of environment – curated towards the innermost ease in awareness and introspectiveness – has allowed for the music itself to exist not as an end in and of itself, but rather as a means to something much larger, much more cathartic, much more liberating.

In our discourse, we allude to a moment in the final track on the album, transcending, where she says: “You and yours, don’t hold back, let it all out. Cause the ghosts are aground. You can tell the start’s not always the beginning.”

“It’s about coming into and being at peace with my human form, and all the things I don’t know – all of the beauty and magic that’s in store for me that I can’t see or feel,” she explains, as I ask what transcendence means to her journey. “I think transcendence is about a moment of surrender,” she tells me, and it’s this very essence that is exuded by the entire album’s cadence, and progression.

With underlying recurrent themes of self-soothing and release, anaiis shares that it took learning to trust in her intuition to bring forth the necessary depth that unfolds across the twelve tracks. “I was really trying to connect with a much more spiritual part of myself, and I just allowed myself to let my feelings guide me,” she says.

What remains so tactile throughout our discussion, and reverberates through the entirety of this is no longer a dream, are these careful considerations that simultaneously address giving into fear, and the worthiness of release, as a sort of two-ingredient cataclysmic cocktail for a seemingly necessary transcendence.

Transparency, community, and shared space for growth are all factors which anaiis considers to be integral to the success of the work. Having collaborated with artists such as Chronixx, Topaz Jones, and the fashion photography duo of Rafael Pavarotti and Ib Kamara on the album, she notes a certain kinship, and dedication to these factors which have allowed for an honest rendition. “I have an amazing community of people who are all coming together to tell this story with me,” she says, noting the importance of what adrian maree brown’s emergent strategy refers to as, “co-evolutionary friends.” “We’re not doing this for ourselves. We’re exchanging energy, and it’s about realising that we’re all interconnected. It’s about us all growing, together.”

Using her art as an outlet to express both the light and dark of her inner world became a necessary tactic, and in the initial disconsolation that came along with the COVID-19 pandemic, and subsequent Black Lives Matter outcry, instigating an overwhelming instance of despair amongst many – and especially Black and Brown – people of the world, it was one that she would continue to employ for the benefit of her community. “It got to the point where everyone was depressed,” she says, “I felt guilty if I even laughed, [but I realised] my joy is a beautiful thing, so let me find a moment for laughter. Let’s allow ourselves to live, and to understand that there’s a greater picture to this that we just can’t see.”

Her own personal struggles, together with these wider pressing issues of collective liberation, comprised the material upon which brought the album to life. And through “massaging all the places that hurt,” subscribing to the support of friends, and therapy, anaiis was brought to a place where love – for self, and other – could become her point of focus.

Her process, she tells me, encompassed a lot of exploration around “imagination and surreal- ism,” bringing to my mind Frank B. Wilderson’s Afropessimist musings on the benefit of a radical imagination. “[I wanted to explore] how we can take the information we have, and the information we don’t have, [and] project ourselves to a state of liberation,” she says.

Following in the footsteps of the trailblazers who came before her, anaiis gives way to the “push and pull” of human emotion through her music, allowing for her darkness to be seen, while too drawing upon hope, and a “readiness for things to be easier,” as motivations for this unselfish act of making.

And to be two young Black women, sitting here, able to make the work we do and share sentiments in this way, it all does feel a lot more real, a lot more present than it maybe ever has been. And with that thought, we can’t help but smile – humbled, and grateful. “This is the moment where I get to claim my future,” she tells me, as I nod along with her, and she speaks with a tangible fervency, laced between her assertions. With an interior score, and mouthed words, I come to learn, that this is no longer a dream — is actually a line from her song, “crying in your sleep.” And as she sings it to me, the words trickling throughout my body, I can feel it.

“We don’t have to be dreaming about it anymore”, she says, “it has arrived.”