Glüme is a wunderkind, a self styled Walmart Marilyn Monroe, imagined through the lens of David Lynch. Her recently released album ‘The Internet’ explores love through a postmodern lens, but even though she embodies Marilyn’s looks we discovered in thought, she’s far from a tragic heroine…

GL: You’re often called the Walmart Marilyn Monroe, can you tell us where that came from?
G: When I started using TikTok I was doing a lot of Marilyn impressions and I needed a way to label that, I came up with Walmart Marilyn and it just stuck.

GL: Where did your fascination with Marilyn Monroe come from?
G: When I was much younger I was in therapy and my therapist suggested I need a female role model, she gave me a book about Marilyn and I instantly connected with her. As I’ve grown up I’ve noticed similarities between us, our patterns in dating and other ways, so I feel increasingly connected to her.

GL: Can you tell us more about your latest single and video, Arthur Miller?
G: Arthur was Marilyn’s last great love but he also broke her heart. I think it happened because he loved the idea of her and then when they were married he had to deal with the reality of her too and for some men that’s too much. It happens a lot, especially nowadays with social media, I think that the guy kind of creates this fantasy, this idea of a person and they get their ego stroked by being seen with them by being with them. It’s kind of exciting. Then it’s kind of like they don’t know what to do with you, when you’re a human with needs. They weren’t really thinking about that, when they got into it they were more just thinking about the excitement and so they kind of just don’t know what to do with you. Arthur Miller did the whole, you know, he did the narcissistic supply, leave and discard pattern.

GL:Was that front of mind when you wrote this or was it more personal?
G: I was dating someone at the time who was like that, and I was thinking back to when I was young, I was like, “Oh yeah, I was like reminds me of that movie that I saw “ and then I researched Arthur Miller a little more and I realized I was writing a song about this and the parallel experiences a lot of women have. I think a lot of girls can relate to someone having an idea of them and then once they realize you’re a human you become too much . I also can’t believe he did that to Marilyn of all people

GL: Was the video created as an homage, or did you have other ideas when creating it?
G: I basically wanted to show Marllyn and Athur Miller when they were happy because most of what you think you’re getting when you’re dating Arthur’s type for a while is great. I wanted to show Marilyn being happy in the joy of being with him. Also I don’t think that people realize how much that affected her in the last two years of her life, because I think she thought she felt safe with him and then and then you know when the person you think is safe just bounces from your life, it’s really destabilizing. He was really the one heavily pursuing her, she just was going along for the ride and then he switched. She found in one of his journals that he’d written” I wished I never married her.” He would gaslight her by saying “it’s okay, I don’t feel that way” but by then she just felt so insecure with him and then he’d say, “oh, you’re insecure”. But, it’s like, of course, she’s insecure and then he leaves. In the video, I wanted to show most of the video of them being the ‘Happy Days’ where you’re in your honeymoon phase, but then at the end, she finds how he really feels.

GL: What is about the story of their love that grips you?
G: For me it’s that parallel between everyone’s modern experience of love and dating and then also this historic kind and iconic woman’s experience. It’s interesting, because I think if you look at a lot of women that we can think of over time like Elizabeth Taylor, Audrey Hepburn, Marilyn even , Jennifer Aniston, they haven’t had incredible success with love and you grow up  and think “wow, if Iwere like that, people would want me.” I think though that these iconic women, can just become ideas to people and they’re beautiful and intelligent. For men to be around that and to not be in the spotlight can be hard.

GL: Do you think that’s always been the way?
G: I do! I remember Rita Hayworth said of men  “ They go to bed with Gilda and they wake up with me” So it’s definitely a thing that I think a lot of talented women go through. Even now  with online dating, you have your great dating profile with your best photos but when guys meet you their idea is already formed.  For women,  we are a little bit more geared to be nurturing and we’re not expecting, like a guy to be Prince Charming and carry us away on a horse or anything. We’re just like, okay, are you nice, do you like fun things? Do you have any STD’s? For men, it’s more extreme “Oh, you were upset with me last night. This is too much”.

GL: You’ve got some really exciting things coming up. Can you tell us about some of them?
G: I’m going to do a tour in August and I’m just going to be playing shows all fall and then I suppose I’ll be working on the new album . Right now the focus is “The Internet” , the record I just put out and working on another video. I’m also performing at a burlesque night at the Globe Theater, which is going to be super fun! 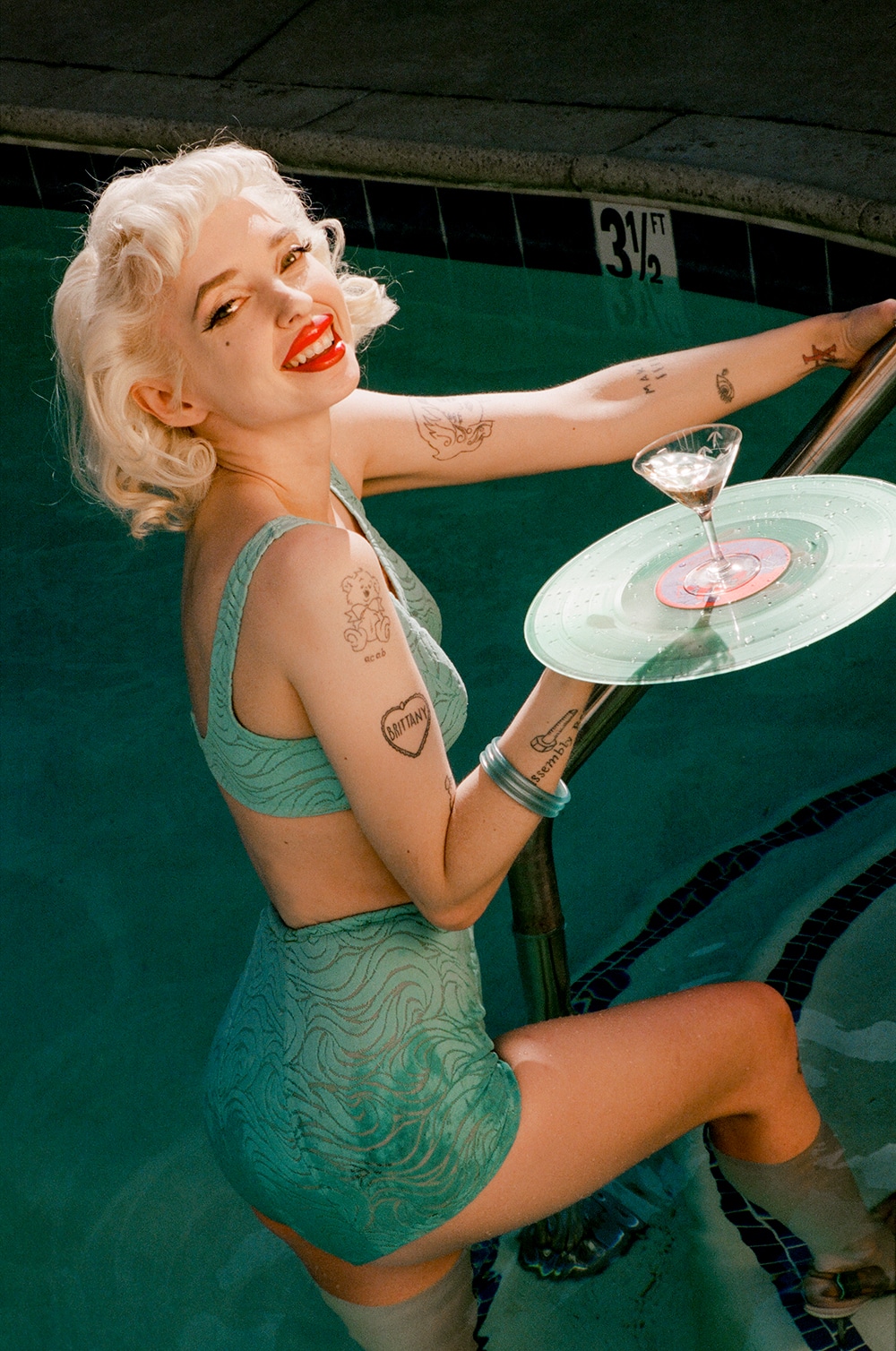 GL: You’re also currently on billboards all across LA! How does it feel to see that?
G: It’s weird because it feels really surreal to see it. Sometimes, I’ll forget and I’ll be like going to get a smoothie at Naturewell then I’ll just be like there I am! . I’ve been working since I was like 6-ish and I’ve been working in music for a long time, too. So I think just after a lifetime of trying, it’s a little bit, even emotional to see them. It’s kind of overwhelming, I guess because I’d like to go back and tell six-year-old me “You did it!”

GL: The Internet has been out a couple of months now, how does that feel and what do you want people to know about it?
G: I’m really proud of the record, for many reasons but also because when I made it my heart disease was at its worst and we hadn’t figured out medications. I wrote a lot of it like, in hospital, and I  really was feeling like it was keeping me alive and giving me purpose. A lot of the tracks on there are about personal experiences and some are about being sick and trying to have a love life while being sick and it hurts because, you know, you can’t have adrenaline. You can’t have a lot of things that come with dating and so it’s really complicated.

GL: What were your intentions with this record?
G: I tried to write music that I guess would make people feel stronger. Whether they were struggling with mental illness, or physical illness, or whatever they were, I want girls out there who are sick to still feel like they have a song to make them feel glamorous about it too. I don’t think you have to neuter yourself once you’re sick. You should still do the things you love, even if you have to do them from bed and I don’t think you have to give up everything that you once enjoyed. I went through that phase where I thought I had to and I was like, well, I guess I’ll start gardening and how do you crochet? Now I’m touring my album, and it can be hard and with some live shows I definitely felt pretty rough afterwards but my cardiologist said “With your disease, nothing’s going to be safe. So you might as well do what you want and go out” So I mean the album is definitely a lot about being ill and being in love and love sick and typically sick and it was a rough year when I was writing it but a lot of good happened too.

GL: Do you feel with all those experiences that you’re taking up Marilyn’s mantle of the tragic heroine?
G: In some ways I probably am, I recently saw a psychic who said in my past life, I died tragically. I don’t know how anyone else takes that but I mean for me it was clear. So guess I was Marilyn! That said though I don’t want to be a victim to anything, because I’ve seen that in people that I know, and I don’t ever want to be a victim because first and foremost, I am so grateful to be on this planet after being in the cardiac ICU and like, I am really lucky that I get to do what I love, even though I’m sick.

GL: How have you made that work?
G: Determination but also support, my label has just been very protective of me.They know about my disease fully and make sure I’m taken care of before shows and it’s really sweet. In some ways yesm my life has been totally tragic but I’m really happy. When I wake up I’m like, okay I got another day nothing weird happened with my heart  and I’m going to see if I can do something cool with it. Once I get out of bed, I’m like, let’s do it. I want to make the most of things.

The Internet by Glume is out now on Italians Do It Better, the video for Arthur Miller is out now.