On her day off, you might see Joy Crookes driving around London in her Peugeot, roof down, soaking up the city she proudly calls her “stomping ground”. Her debut record Skin, released in October, propelled her into the top five on the UK album charts – her soulful, old world sound slotting right into the sweet spot between classic and change making. She’s a musician fearlessly fusing her Bangladeshi-Irish heritage and unaltered observations in songs, nullifying vintage labels attached to soul by catapulting it into Gen Z relevancy. A Londoner who’s music videos pair her bright namesake to the most vibrant enclaves of the city she loves so dearly.

It’s not often you interview a rising star and they say you’ve inspired them. Particularly when you’ve just met. But before I get a big head, I confess that I’m not special, or rather – I am, but so is everyone else in the eyes of Joy Crookes. “Everything inspires me, it’s ridiculous,” the 23-year-old British singer says. “Five minutes ago you said ‘hard truth’ and that’s been stored in my brain. Now I’m probably going to use that in a lyric, the phrase ‘hard truth’.” Admittedly, I have no idea of the context in which I said ‘hard truth’, but if Joy clocked it (she’s as switched-on as they come), it must be true.
Joy gained popularity on YouTube as a teenager when she uploaded covers of greats such as Ray Charles, before releasing
her first single at the age of 17. Comparisons to Amy Winehouse and Billie Holiday may help paint a picture of her voice, but can’t truly capture the colourful breadth that is Joy. She’s been nominated twice at the BRIT Awards, and since the release of her debut album Skin last year, has played a flurry of sold-out shows, performed on The Graham Norton Show and The Late Late Show With James Corden, and has just been announced to play Glastonbury 2022. As I write, her most well-known song, Feet Don’t Fail Me Now, has racked up nearly 15 million plays on Spotify, and her album – with its themes of breakups, politics, gentrification, generational trauma and family – has continuously received critical acclaim.
Just like the vulnerability of her music, ‘honest’ is a word that captures Joy. She explores every hue of an idea, putting no filter between her mind and lips. “I’m not trying to hurt anyone,” she says. “I actually think the world is a more loving place when people are honest.” At this point, she quotes bell hooks. “In All About Love, she talks about how you can’t exist or lead with
love in a world that lies, and that includes white lies. So even now I’m trying to practise when someone asks how I am and if I’m not having a good day, I’ll tell them. That’s not for them to mollycoddle me, I just don’t want to lie.”

Joy pins her directness down to her grandmother, mother and father’s influence. “My parents are both highly direct, but also all the people I’m most inspired by have the common thread of being extremely direct people. When I listen to all of those female Black jazz singers, they went onstage and sang songs that are deeply unapologetic, in bars they weren’t even allowed to sit in with punters. That to me is power and it evokes so much emotion to have so much influence but then balance the reality of life in the 30’s to the 50’s to the 60’s as Black women. I can never relate to that completely but I guess there’s a shared experience as a brown woman.”
The song 19th Floor on the album is an ode to her beloved grandmother, who lives on the 19th floor of an apartment build- ing. “She’s ruthless,” says Joy, nothing but admiration in her voice. “She has incredible amounts of agency, she’s so independent, she’s been through so much and she’s funny. She could easily retire in all senses of the word, but refuses to because she’s under- stood what it is to fight for her own independence. I’m really proud to be her granddaughter.”
Joy honours her roots by regularly dressing in Bangladesh-in- spired fits and even Irish dancing in one music video – a routine which evoked so much passion that she broke a small bone in her foot. She refuses to fragment her heritage, instead celebrating her mixed ancestry by embracing all parts of herself and the multicultural community she grew up in. In her music videos, she pays homage to the joys of the London she knows– scenes of street markets, people dancing, the busy goings-ons of the bustling city – whilst never failing to acknowledge the frailty of infra- structure in a system determined to gentrify. “Skylines that I don’t recognise, strip the life out of these streets, it’s a daylight robbery” is a line in her song 19th Floor that airs her sadness towards capitalism’s erasure of community in the name of progress. 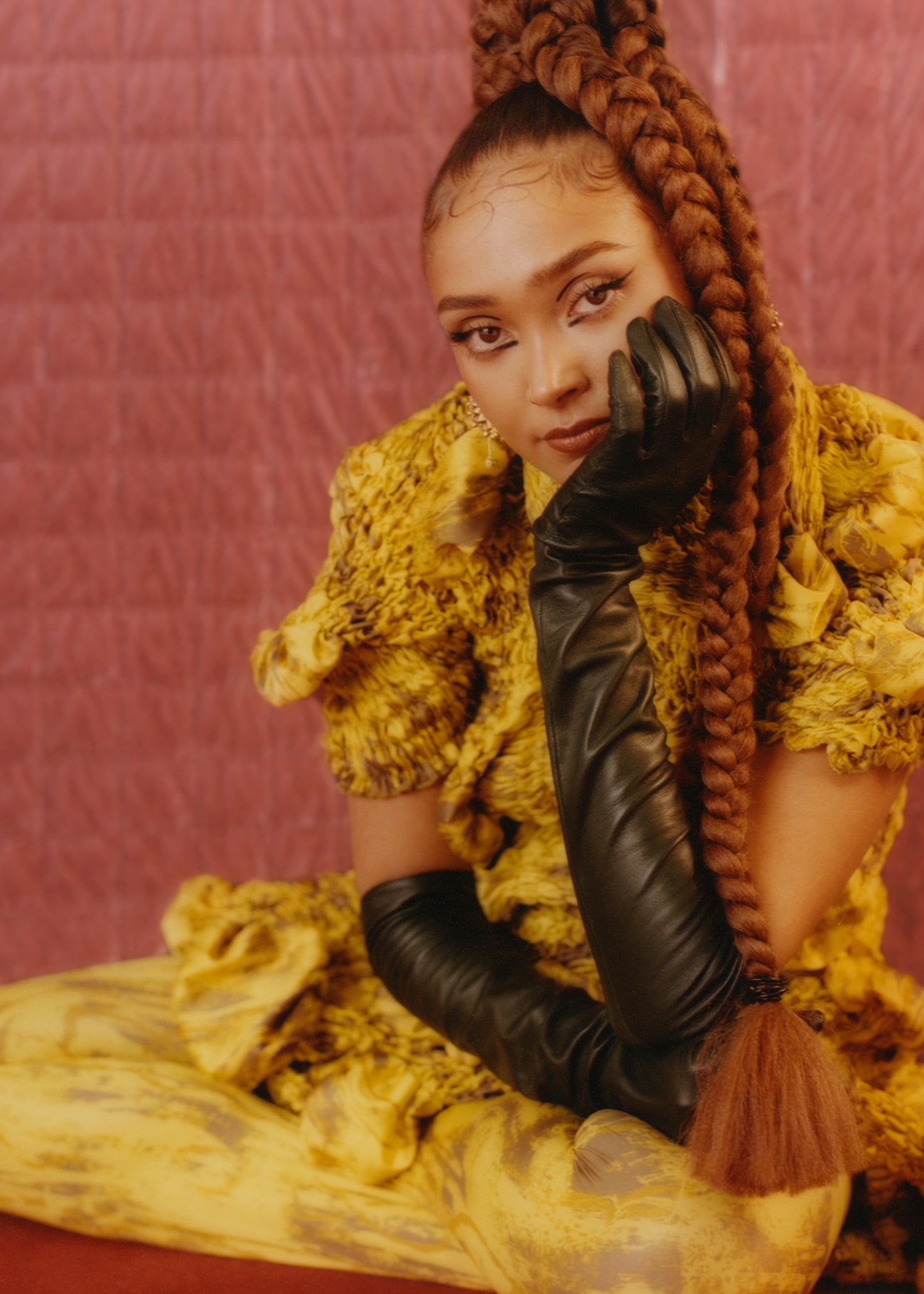 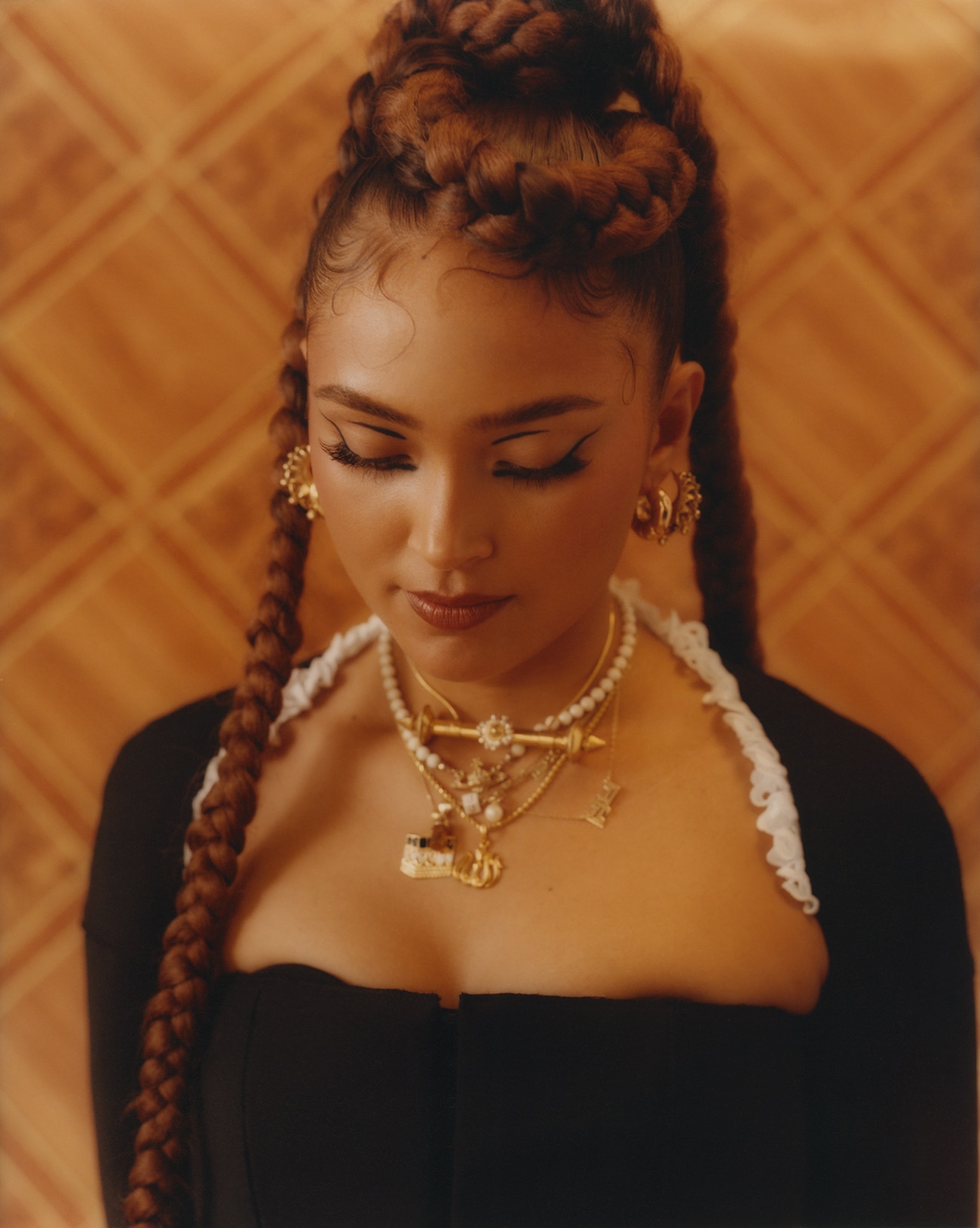 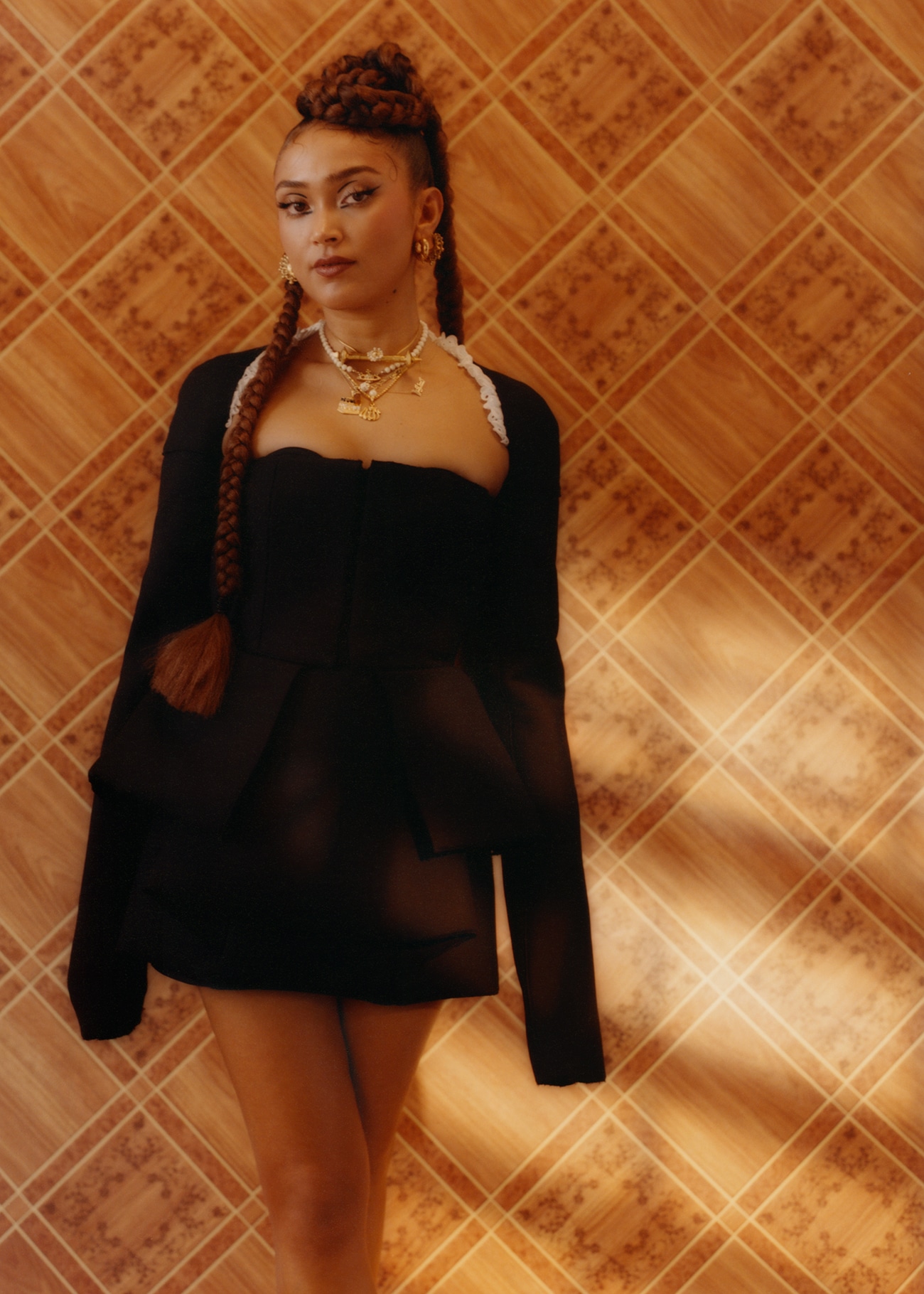 Growing up in Elephant and Castle, South London is still home for Joy and her love for it is the reason she chooses to live there today. I ask how members of her community react to her music, and she’s humble, “There’s obviously people who don’t give a shit and that’s absolutely fine and I’m here for it, but the people who do care and some of the people I grew up with are massively supportive. They remind me of when I was super young and might have said ‘I love music’ or ‘I love singing’ and now they’ve seen this trajectory and they’re so genuinely happy for me without asking for anything.” The local caretaker called Rocky is also an encouraging fixture of the community. “He gives me lots of hugs and kisses and tells me he loves me. I’ve even mentioned him in a song.”
I ask Joy where she’d take me if I visited her in South London. “First, I’d take you for food at my grandma’s,” she answers. “You get a beautiful view of all of South London from there as she’s on the 19th floor. Then I’d walk you through Brixton Market and East Street Market in Elephant and Castle. I’d make you eat at Fish, Wings and Tings, I’d take you to Kennington Tandoori, which is the best fucking South Asian food in South London as far as I’m concerned. And I’d hope that it’s a sunny day and whip off the roof of my Peugeot and also make sure you eat fry up.” It’s important to note that Joy also loves a pub-made Bloody Mary. And she hates gin.
Despite the obvious highs that come with Joy’s successes and the life she’s building, there’s a difficulty in making such vulnerable music, too. She’s been open about her struggles with mental health, and whilst she’s grateful her music can help people, the responsibility has felt massive at times. “The conversations I have with fans, when I’ve been on the phone with people in ICU… I’ve had pretty intense fan moments because the music and I guess the way I sing is so deep. Not always, but the subjects I touch on, not everyone touches on, and that can be a real responsibility I haven’t necessarily sought out to take.” 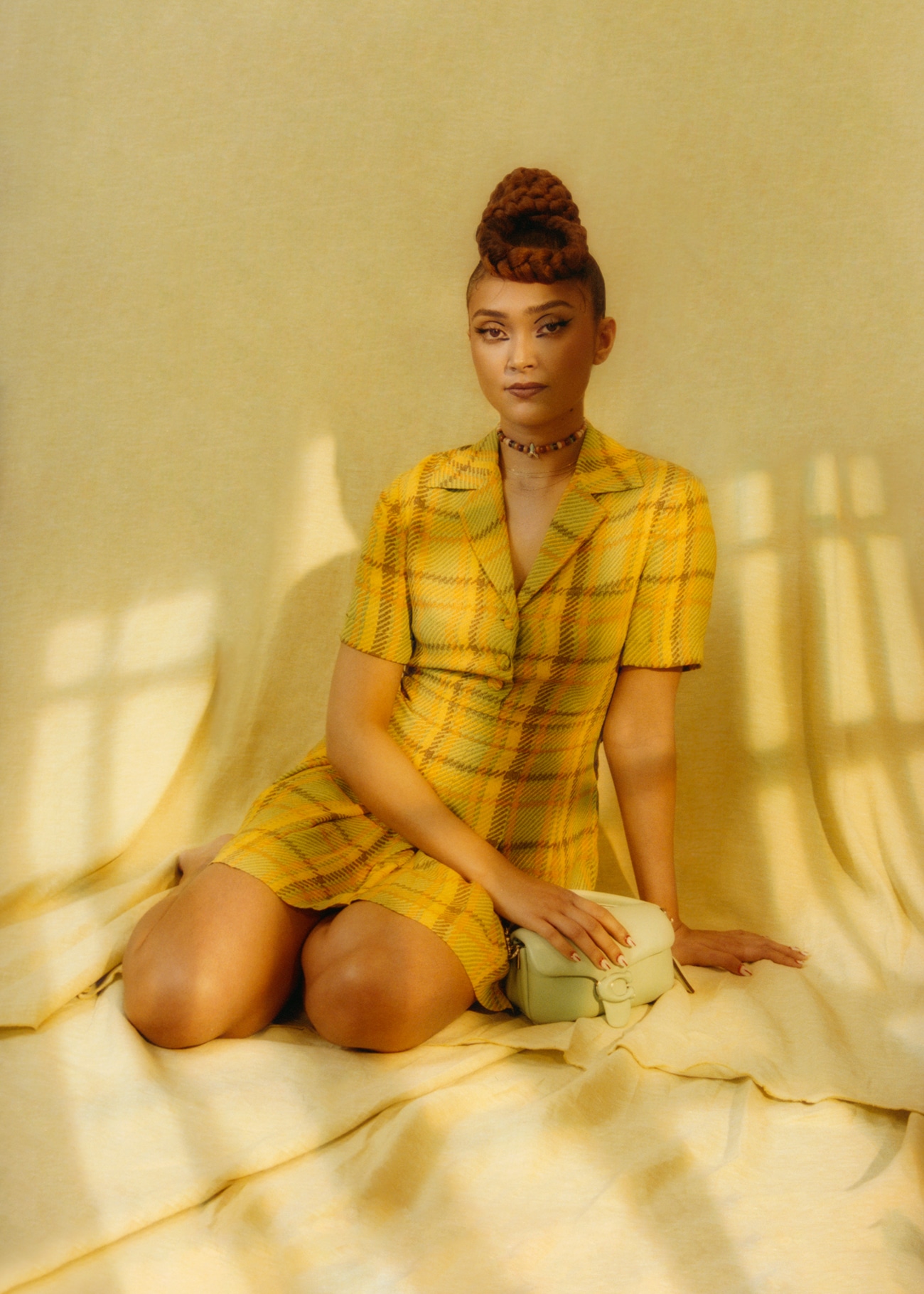 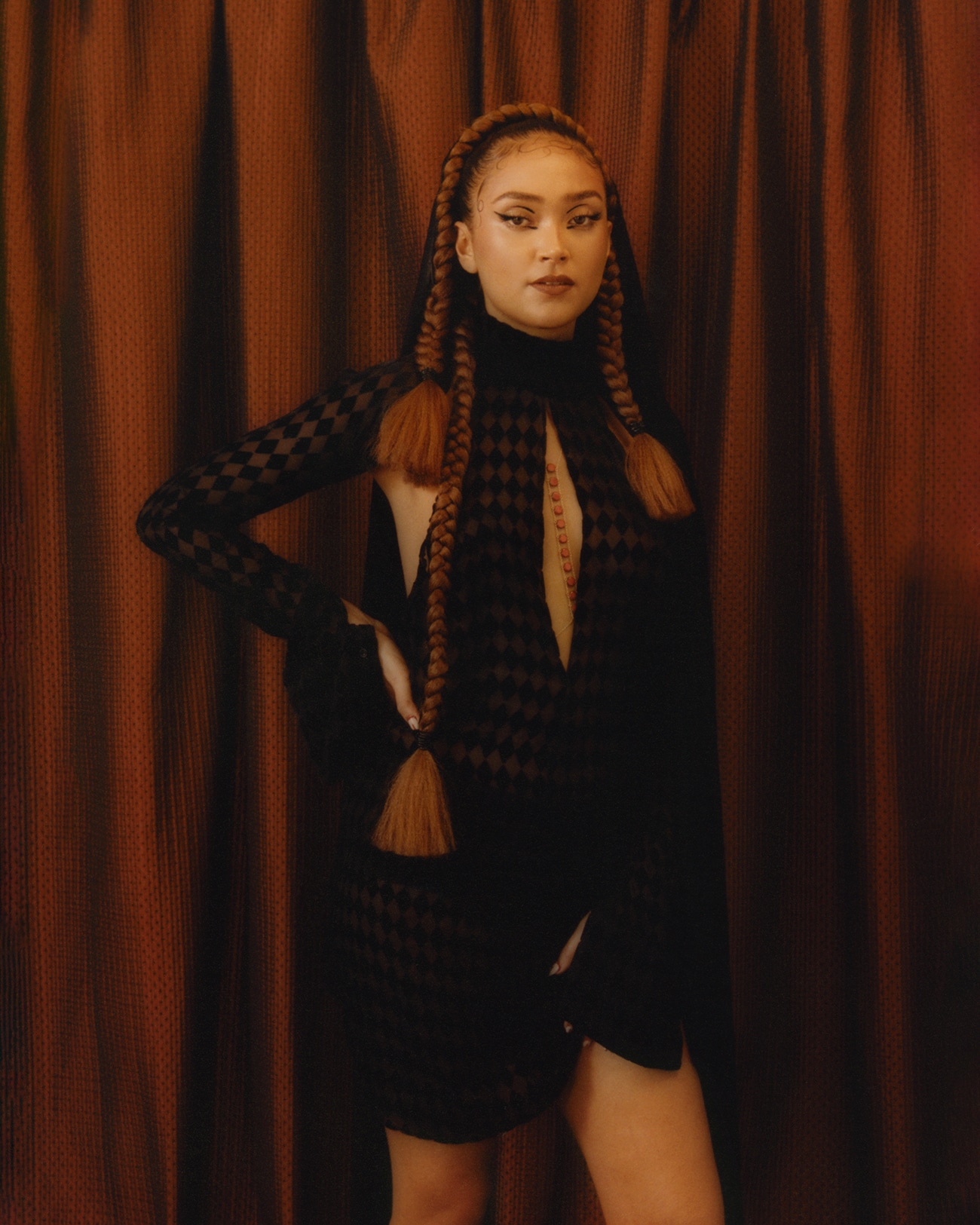 Similarly, Joy’s success as an artist of Bangladeshi descent can be mistakenly perceived as “South Asian representation” in the public eye. Whilst Joy is happy for her career to be an inspiration, the pressure to represent a vast array of people is of unfair proportions. “It’s beautiful to know that I make other people feel seen, but I don’t do this for anyone else. I’m happy to support others but it’s too much pressure and realistically how is one person meant to represent an entire area of the world that’s so multifaceted? That’s too much.”
Joy’s primary focus is ensuring she’s responsible for herself and can implement healthy boundaries in her life. “It’s really important to have separation [from my job]. I’m so eternally grateful that people can relate to what I sing about and that makes me feel less alone, but it is really hard to take on other people’s issues as well. It’s deeply ironic because my album is called Skin because it’s about owning my own identity but that doesn’t mean I suddenly have to own everyone else’s.”
In her day-to-day life, a strong way in which Joy owns her identity is through her style. “I just try to be myself as much as possible,” she smiles. “So on a completely day-to-day level, I love wearing all of my jewellery and I love to dress in a way that feels like I’m going out and representing myself every day. Not myself as an artist, but myself as a person. This might sound corny but for me everything has to be full circle, so If I’m being reckless or I’m going to the library or I dunno, sim- ply surviving, I hope that in whatever way, manner or routine I’m doing it in, it’s authentic and it’s serving my purpose.” 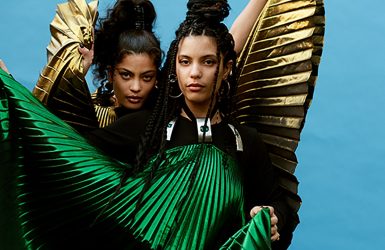 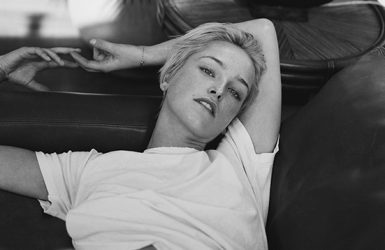 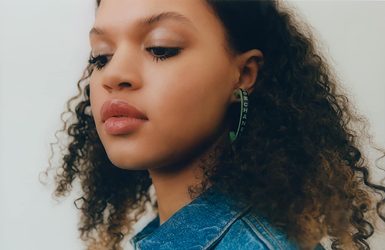